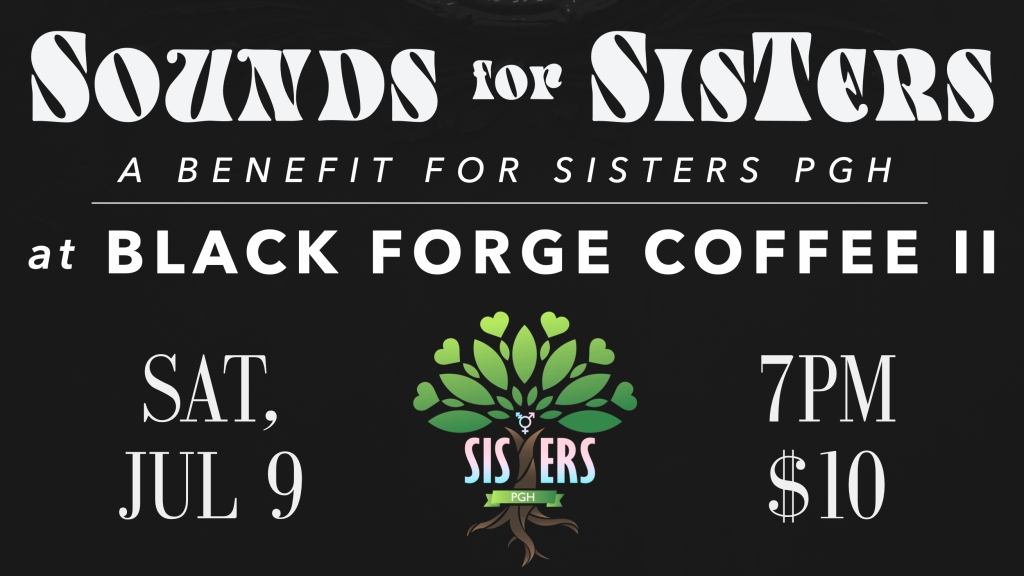 Some musicians and artists feel a pull toward community support and change. They want their music to be a catalyst for making a difference in the lives of individuals, in the local community, or in society as a whole.

I talked with some musicians and artists who feel this way as they prepare to perform for a benefit for Southwestern Pennsylvania’s SisTers PGH. They share their reasons for using music to impact the community and give some insights and inspiration for others who wish to do the same.

Sounds for SisTers will take place Saturday, July 9, 2022, at Black Forge Coffee House II in McKees Rocks, Pennsylvania. 100% of proceeds from the event and sales of special merchandise will be donated to SisTers PGH. Raffle tickets benefiting SisTers PGH will also be available ($5, only at the event) to win a framed print of trans artist/activist Micah Bazant’s “No Pride in War.”

SisTers PGH is a Black and Trans led non-profit organization that serves QTBIPOC (Queer Trans Black Indigenous People of Color) trans, and nonbinary people within Southwestern PA. They offer many programs and resources.

I learned about the event from J. of Sommelier. His passion for encouraging and helping others in the independent music community to think about – and act on – ways of supporting others by pulling together resources and people was palpable. The artists performing at Sounds for SisTers were invited to share their thoughts on the event, the connection between music and community support / change, and ways that others can help in these efforts. Read on to learn what J. of Sommelier, Halloway Williams, and Donny Donovan of Hearken had to say!

Halloway Williams is an American Indie Pop act based in Pittsburgh, Pennsylvania. It is the official stage name of singer/songwriter/producer Billie Sue Bracken (She/They) who is a queer artist and an advocate for mental health, body positivity, and support for neurodivergent and disabled individuals like herself. Halloway Williams released ROCKABYE in 2022.

Hearken is an emo, grunge, indie, punk band from Pittsburgh, PA. They describe themselves as a queer band representing the non-binary and trans community. They’ve been a band for 4-5 years, releasing Help Me, I’m Alive in 2018. This is a new lineup, especially since Donny Donovan’s vocal transition. Hearken is Donny Donovan (they/them/all) as song writer / singer / guitarist, Leo Rogers (he/him) as drummer, and Bea Langer (they/them) as bassist / singer.

Why is this event important to you?

J. of Sommelier: Trans people and specifically trans people of color have historically and continue to face surging degrees of violence, discrimination, and hatred across the world. If we have the ability, we should do what we can to help amplify trans voices, trans-led organizations, and support systems.

Halloway Williams: As a queer person myself, it is important for me to support others in the community in any capacity.

Donny Donovan of Hearken: To raise funds for SisTers to help them continue their work and impact for the trans community.

Why should this event be important to others?

J.: SisTers PGH does just that – it is a community that makes safety, growth, and personal power more accessible for trans and nonbinary people in our region.

Donny: Because it’s raising funds for SisTers PGH while showcasing local queer talent. Trans people need access to healthcare and other resources especially since they have been largely discriminated against, turned away, or treated unfairly.

What can audiences expect from your performance at the event?

Halloway Williams: I’ll be performing a variety of queer songs that I’ve written.

Donny: Our set will be stripped down because we are having a fill in drummer, Aiden Angle (he/him). He’s been one of my longest friends and the first friend close to me, who started his transition over 12 years ago. My song “Fix Me” which we will play, is a song I wrote about being trans. I really struggled with deconstructing ideas about just accepting my body as it was made and not wanting to fix it. I finally let go and realized getting top surgery wasn’t fixing it, it was helping me get closer to who I am. It was healthcare and really gave me confidence, damping my gender dysphoria. I practiced a lot of meditation and read different “love your body for how it was made” or “changing your body is just an outside desire” texts, which really messed me up. It created a guilt inside me for not being thankful for what I did receive, but I finally realized we have the tools, the medicine, and the support to get access and care to apply for gender affirming surgeries and modalities.

What role does music play in community support and change?

J.: I’m reminded of an explanation by the musician Van Dyke Parks on this subject, which I’ll paraphrase. Music and lyrics have a tremendous political potency – to be memorable and to unite people. I may be a dreamer, but I believe there’s a value in that which can’t be stolen or compromised.

What responsibility – if any – do musicians and artists have for driving community support and change?

J.: Musicians are inherently multi-taskers. Musicians are thoughtful. Ultimately, I don’t think the makers of the most nihilistic music have the ability to be completely apathetic. If you can gather more than one person in a room, think about doing so. Then think about the endless amount of good reasons to do that. But don’t forget to do it.

Halloway Williams: It’s always important to me that I don’t sensor myself or shy away from political topics in my music. I think it’s important as artists to share their stories and help to amplify the voices of others who cannot. When you share your music with the community, you are sharing an experience and perspective that they may not have witnessed before. This helps encourage empathy and understand in ways that other interactions can’t reach.

Tell me about your experience within the music community. How has that shaped, supported, or challenged you?

Halloway Williams: As a queer, pansexual artist, my songs have no boundaries. Sharing my own queer stories in a city that has conservative pockets can be scary. Luckily I have been met with a lot of support in most cases. It is always in the back of my mind before I start a song that doesn’t shy aways from my identify, but I sing on.

What changes would you like to see within the music community as it relates to community support and change?

J.: Think about what you can do to promote events and releases that bring marginalized groups to the forefront. Make an effort to explore outside your music preferences. Share independent music with your friends! These are all ground-level actions that I’ve seen affect community change.

Halloway Williams: On a bigger scale, I would like to see venues booking more women, queer folk, and BIPOC individuals. Our stories deserve to be heard and supported.

Donny: Less all white male events. More inclusion, representation, and diversity. Funds for the artists from the city. Musicians and artists need compensated for their work. It is a part of the culture of the city and needs to be treated as an enhancement.

What changes would you like to see within the music community as it relates to QTBIPOC trans and nonbinary people, specifically?

J.: I think that all I can suggest is that musicians continue to seek out and familiarizing themselves with organizations (both in our region and beyond) that are led by the people they intend to represent or support. Consider if you are able to support their efforts. Think big!

Donny: There needs to be hands down more representation. If you want to book an event / show that has anything to do with queer people, do your research and find the artist or musicians within community, but also invite these artists to ALL shows and events. For example, make your own shows and space more inclusive and diverse. Also, artists and musicians need to be compensated better or at all. That rarely happens and these artists are left empty and doubtful. If you have an event that’s connected to an organization, make sure you have good cross marketing and promotion. I see a lot of shows as benefits which is wonderful, but I would hope the organization also promotes to their audience and followers, so people can not only donate but experience live QTBIPOC performances right from the community.

Thanks for reading about music, community support and change. We appreciate Sommelier, Halloway Williams, and Hearken taking the time to talk about the benefit for SisTers PGH. Be well!

If you like what we’re doing, please consider supporting us by subscribing, sharing, and following us!

iThere are no comments

© Copyright Of Music and Mind, 2017-2022. Unauthorized use and/or duplication of this material without express and written permission from this site’s author, photographer, and/or owner is strictly prohibited. Excerpts and links may be used, provided that full and clear credit is given to Of Music and Mind with appropriate and specific direction to the original content.