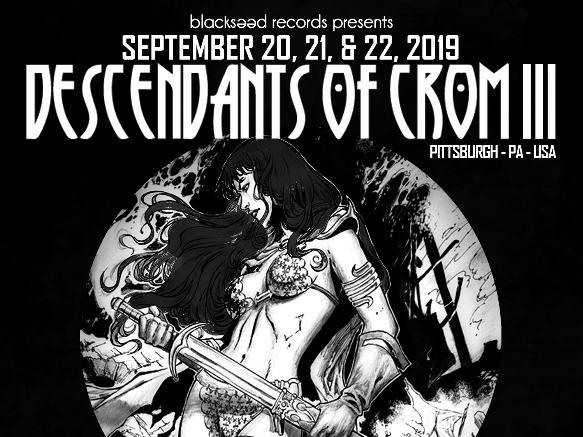 You may or may not know: Pittsburgh, PA has a thriving heavy music scene. Bands that live in the Metal, or Doom, or Stoner, or Psych, or Experimental realms – or bands that wander through them all and skirt the fringes – find refuge here. If it’s heavy, it’s home.

And what is heavy music, anyway?

There are lots of ways to describe it – what it sounds like, how it makes you feel. Definitions range from the simplistic to the arcane.

I asked the question, What is heavy music, anyway? and got some interesting and wide-ranging answers.

For some, heavy music has a clear formula.

For others, it’s more about composition.

Plenty of low-end — not every instrument in the arrangement has to carry low frequencies, but they must leave plenty of space for it. Much of the best heavy music is also built on a swinging rhythmic foundation, regardless of tempo. But in music, rules are meant to be broken, which is why I think Bert Jansch’s “Jack Orion” album – traditional Scottish and English folk music on two acoustic guitars – is as heavy in its own way as the best doom. – Joe Tarowsky of Pittsburgh’s Doom Pop, Art Rock, Post Punk band Action Camp

The story – more so than the sound – is how others define it.

A few things come to mind right away. First, one may think of the tonal qualities of the song such as Sunn O))) or Boris for example. Personally I think it better relates to the depth of the story being told within the song. I think everyone loves a good story and one that touches on a subject matter that is engaging, it draws the listener in. If you find yourself exhaling at the end of the song, then you’ve probably experienced it’s heaviness on an emotional level. – Randy Branch, Pittsburgh Guitarist

And there are practical applications, according to some.

Heavy music is extremely therapeutic to play, and to listen to. Otherwise, “heavy” has always been subjective and keeps (thankfully) changing and evolving as time goes on. – Matt Rappa of Pittsburgh’s Noise Rock/Experimental Jazz band Skeletonized

Where anger is cathartic. – Sarah Lorraine, journalist, designer, and Heavy Metal lover from Youngstown, Ohio to Austin, Texas (and beyond)

For most, it defies language and is all about feeling.

Heavy music is a feeling. It’s something you put out there into the universe. It doesn’t depend on volume or dirt. It is beyond language and will exist after we die. – James Clarke of Austin, Texas’ Sludge band Monte Luna

Heavy music to me is music that is deep in emotion that can be felt between the artist and the listener. – Kasey Grogg of North Central West Virginia Melodic Hardcore band Halyein

When the emotion and soul takes hold, and gives the song an atmosphere. A new depth that gets the hairs rising and the blood pumping. An orchestra can be heavy. Johnny Cash was heavy. Black Sabbath was heavy. It’s a mood and it’s an attitude. – Rick Polo of Youngstown, Ohio’s Alternative Rock band Baroque Monody

If you really want to know if something is heavy just ask yourself how weightless it makes you feel. – John Roman of Pittsburgh, PA’s heavy and experimental bands Night Vapor, Microwaves, and Brown Angel

And you can define it by its essence – what it is (and isn’t) at its core.

Heavy music is any music that takes the dark, destructive, or chaotic aspects of the universe and puts them in a song. Heavy isn’t a tuning, a tempo, or a setting on an amplifier. – Trevor Richards of Pittsburgh, PA’s Doom, Drone, Heavy Psych band The Long Hunt (and co-creator for Of Music and Mind).

Descendants of Crom: A Gathering of the Heavy Underground

If you love heavy music – however you define it – you need to know about Descendants of Crom. Descendants of Crom was founded by Shy Kennedy, vocalist of Pittsburgh, PA’s Doom Metal band Horehound and vocal Soundscape project o Heidrun. She is also the founder of Blackseed Records which focuses on music publication, event booking, and artistic design for heavy and underground music.

The First Annual Descendants of Crom was held in Pittsburgh, PA in September 2017 featuring primarily local and regional acts. Each year, the event grows – more bands from more areas performing to more people. The Third Annual Descendants of Crom features 30+ heavy local, regional, and national bands performing across three days. The Pre-Gala takes place at Howlers on Friday September 20th and the main event is at Cattivo on Saturday September 21st and Sunday September 22nd. Heavy music lovers come from all over – and often stay the whole weekend here in Pittsburgh – to take part in the excellent performances and rich heavy music community. Find all the details and purchase tickets on the Descendants of Crom website.

Get psyched for the event by checking out this DOC III Promo Video created by Trevor Richards and featuring music by ASG!

In our Making Meaning series, artists share a song of theirs and then provide some insight into the meaning of the song. The way artists decide to talk about their song is up to them. They may share minute details about why and how they wrote it, or they may be rather vague about what it means to them. They may share something about the meaning of the lyrics, the instrumentation, the recording process, or even the artwork. Songs mean something to the artists that create them, and we want to know what – in whatever way the artist finds it to be most meaningful to share.

For this Special DOC III Edition, we’re featuring the artists performing at Descendants of Crom III! Starting tomorrow – and every day up until the event – we’ll be sharing 1-2 Making Meaning articles from DOC III artists!

Subscribe to Of Music and Mind to get these articles right in your inbox as soon as they’re published!

Hear the song they chose to discuss, learn what they have to say about its meaning, and find out what excites them most about playing at DOC III! We’re very excited about this Special DOC III Edition of Making Meaning and very excited to celebrate these heavy music bands in our heavy music city!

iThere are no comments